The open air cave paintings of La Valltorta-Gassulla in the region of Valencia.

In 1998 UNESCO declared the enclaves of Levantine cave art from the Spanish Mediterranean basin as a World Heritage Site, these include Valltorta-Gasulla, a cultural park with over 20 kilometres of winding and narrow grooves are considered to be one of the most important nuclei of open air cave paintings in the world. Today, ten of the 99 shelters with cave paintings can be visited thanks to the works which made them accessible.

Beside the river beds which are almost always dry and between the winding ravines of La Morellana, Valltorta, Gassulla and Rambla Carbonera, a hundred rock shelters with cave painting are proof of the lives of some men and women, nomads and hunters, who lived in these places and ravines thousands of years ago. On their journey through the world, some inhabitants from the now distant past, used the walls of these small caves to capture depictions of groups of humans, animals, objects and plants, paintings of life and death, of hunting and gathering, of fighting and war, of legends and survival, an anonymous legacy showing their experiences, thoughts and beliefs.

In its limestone rock walls, erosion created cavities which have been used since the Epipaleolithic-Mesolithic period until the Bronze Age for many rock paintings.

The location of La Valltorta cave sites suggest that the ideological content hidden behind the paintings is closely linked to the sacred and strategic nature of the area. 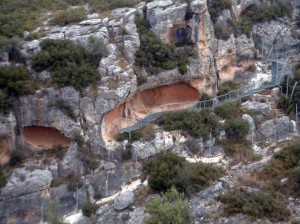 The cave paintings of Valltorta-Gassulla, today the Cultural Park of the Region of Valencia, remained hidden for millennia until the beginning of the 20th century when prestigious historians showed the hunting people of Valltorta to the world. The discovery of the entrails of Valltorta left them fascinated. 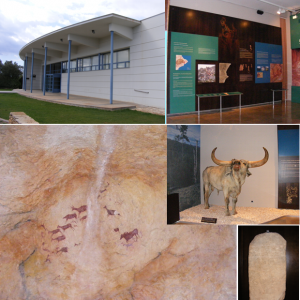 It is from the Valltorta Museum, the heart of the Valltorta-Gassulla cultural park, that the enormous cave heritage is coordinated and managed and it is also the visitor welcome center. The building it is only half a kilometer away from the ravines and has four permanent exhibitions rooms: